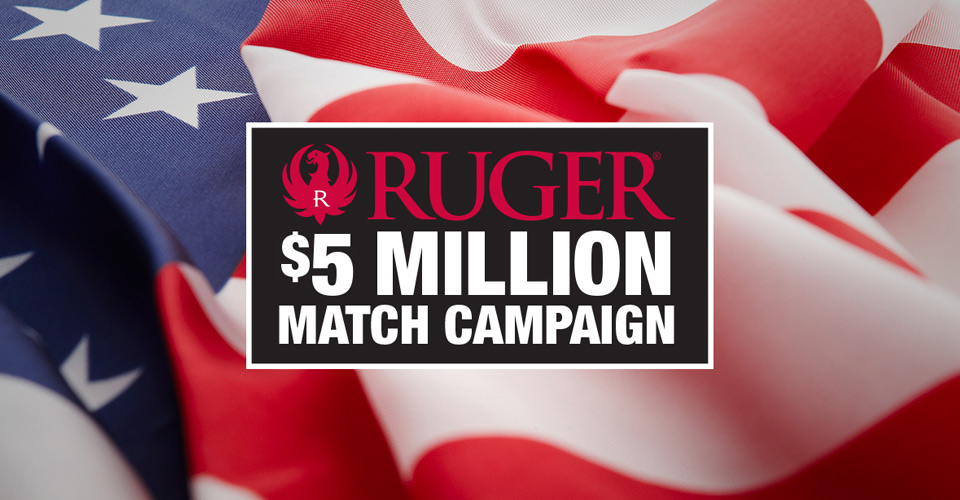 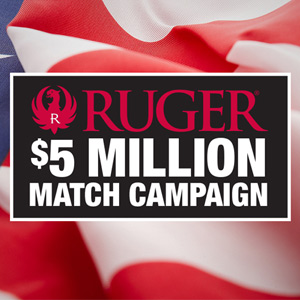 Between August 1 and October 31, 2016, any donation made to the NRA-ILA that is affiliated with this Campaign will be matched by a donation from Ruger, up to a maximum cumulative Ruger contribution of $5,000,000. All donations will benefit the NRA-ILA's efforts to protect the Second Amendment in the upcoming November elections.

The Ruger $5 Million Match Campaign was inspired by the ongoing 2.5 Million Gun Challenge of 2015-2016 and further exemplifies Ruger's commitment to Second Amendment rights. This Campaign provides firearms enthusiasts and supporters of the Second Amendment with an opportunity to give at whatever level they choose, whether or not they have participated in the 2.5 Million Gun Challenge.

"We wanted to offer an opportunity for folks to contribute to the NRA-ILA, knowing that their donation will be backed by a matching contribution from Ruger," said Ruger CEO, Mike Fifer. "Make no mistake, the Second Amendment is on the ballot this November and we all have to be completely committed to preserving it."

Coinciding with the start of the Ruger $5 Million Match Campaign is the launch of the Ruger Take Action web page, where users can learn what is at stake this election year, discover the various ways that they can "take action" in defending the Second Amendment and read up on media coverage of Ruger's initiatives to do the same. The Ruger Take Action website will offer information on a variety of avenues of participation, including: buying a Ruger® firearm, donating to the Ruger $5 Million Match Campaign, writing to congressmen, voting in the upcoming election and joining the NRA.

"Friends, the fight is already on. If we wait until November, we will lose everything. So challenge every gun owner you know," stated Chris Cox, Executive Director of the NRA-ILA. "This is a fight for our freedom!"

For more information on the Ruger $5 Million Match Campaign, visit www.Ruger.com/TakeAction. To learn more about the extensive line of award-winning Ruger firearms, visit Ruger.com or Facebook.com/Ruger.